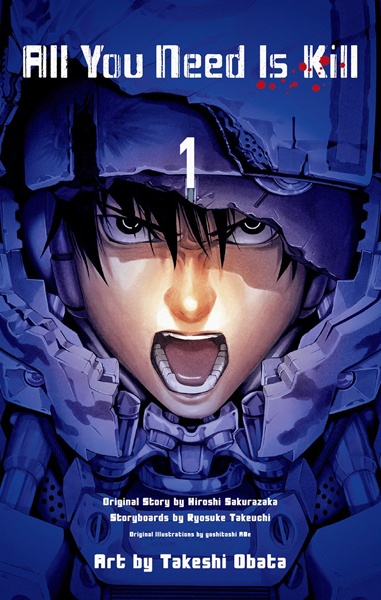 Strange creatures known as “Mimics” have invaded Earth, sparking a global war that has humanity fighting for survival. In response, mankind forms the United Defense Force, a joint organization whose purpose is to overcome this new threat. Dedicated to the extermination of the growing Mimic menace, soldiers are plunged into battle, wearing special exoskeleton combat suits in an attempt to gain the upper hand against their foes.

New recruit Keiji Kiriya is immediately killed after his very first deployment, but to his shock, he wakes up exactly one day before his unit was dropped into a Mimic invasion. After experiencing the same event yet again, he realizes that he is stuck in a time loop triggered by his death. As he relives the day of the battle hundreds of times, Keiji begins to make use of what he has learned about the phenomenon, gradually building up his strength and improving his skills so that eventually, when he comes face-to-face with death once more, he will be ready to change his fate.