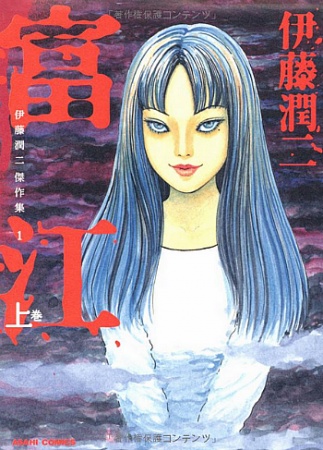 In a high school classroom, students mourn the loss of one of their own: Tomie Kawakami, who has been murdered and dismembered. Shocked by the announcement of her death, the class is puzzled by the cruel fate that has befallen someone so dear to them; such a radiant and beautiful girl did not deserve such a hideous demise. However, a strikingly familiar student suddenly appears at the classroom’s entrance. Gorgeous, slender, and with a beauty mark under her left eye, Tomie smiles and apologizes for being late.

But this is just the beginning of the mysteries surrounding this seemingly inhuman woman. The men unlucky enough to catch her eye become smitten with her instantly, but also become driven by a dark impulse to dismember her, one they often succumb to. And each time, Tomie returns from the dead to continue her favorite pastime: toying with men.

Tomie was published in English by ComicsOne on April 4, 2005. VIZ Media republished the series in a single hardcover omnibus on December 20, 2016. The story Painter was also published by VIZ Media as part of Shiver: Junji Ito Selected Stories. The series was also published in Polish by Japonica Polonica Fantastica in two-volume edition in February and in May 2015, respectively; and in Spanish by Ediciones La Cúpula, but discontinued after the second volume, and will be republished by ECC Comics in August 2016.