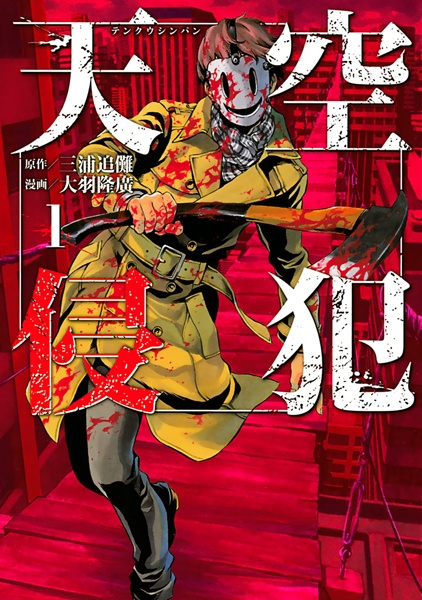 Upon witnessing a man’s head cracked open with an axe, 16-year-old Yuri Honjou trembles in fear and confusion as she flees from the masked assailant, only to find out she’s trapped in an abandoned building where every door is mysteriously locked. Desperately searching for a way out, Yuri runs to the rooftop, but a world with no signs of life stands before her, surrounded by high-rise buildings. Though filled with despair, once she learns that her brother is also in this strange place, Yuri is determined to find him and escape.

However, she soon finds that there are more masked murderers in the area, anxious to terrorize their newfound victims and satiate their sickest desires, leaving Yuri to question if they will be able to make it out alive.

Tenkuu Shinpan was simultaneously published in Japanese, Chinese and English through DeNA’s Manga Box app. The series has been published in English as High-rise Invasion by Seven Seas Entertainment in 2-in-1 omnibuses since June 12, 2018, in French as Sky-High Survival by Kana since July 8, 2016, in Italian as Sky Violation by Manga Drive since October 12, 2017, and in German by Egmont Manga since June 1, 2016.