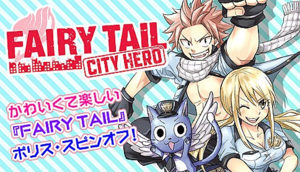 Members of FAIRY TAIL became policemen! The new police officer Lucy was assigned to the Magnolia Police Fairy Tail team. Natsu, Happy and company are keeping the peace of the city with lively ambitions. Guilds and enemies that appeared in “FAIRY TAIL” also appear within the surprising settings. It’s cute and fun “FAIRY TAIL” spin-off!

Written and illustrated by Ushio Andō, “Fairy Tail City Hero” is a spin-off manga that began serialization on October 26, 2018.