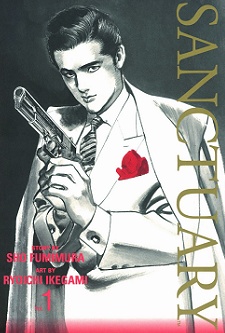 Akira Houjou and Chiaki Asami are childhood friends who have experienced hell and lived to tell about it. They arrive in Japan to attend school, and soon witness the corruption and apathy of the country’s population. Enraged, Akira and Asami vow to create a new Japan; a sanctuary with a new form of politics, devoid of corruption, where people are empowered to participate in the politics and future of their country. To accomplish this, Houjou and Asami aim to conquer Japan through two dramatically different routes: the Japanese Diet and the Yakuza. Decided by a game of rock-paper-scissors, Houjou ventures to seize control of the underworld while Asami pursues the position of Prime Minister.

Sanctuary is a dark, political thriller that tells the story of these two friends as they attempt to change Japan from the inside out and create their sanctuary.

Sanctuary was published in English by VIZ Media, first in comic book format under the VIZ Premiere Comics imprint for a total of 46 issues, split into 5 parts, running from January 1993 to March 1997. VIZ Media then compiled the chapters into nine volumes, published between May 1995 and February 5, 1998.

The English release was nominated for the 1995 Harvey Award for Best American Edition of Foreign Material.